At any time, you can create a new Deco Project by going to File > New, or by clicking "Create New Project" in the launch screen. Projects created this way are temporary (created in your /tmp directory). This is convenient for quickly experimenting with ideas or creating standalone components. To make your project permanent, use File > Save Project and choose a directory. At this point, the project will be moved out of /tmp and be saved permanently.

Your new project will have the following files and directories: 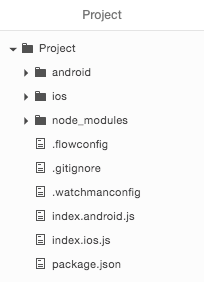 Here's a brief description of each:

Currently Deco doesn't let you change the version of React Native used when you create a new project through Deco. If you want a specific version, you can either update the project after creation, or create a project manually using react-native init.

You can open a project by going to File > Open and then selecting a directory. You may open any directory, even if it does not contain a React Native project. However, for Deco to correctly run the React Native packager and execute your project on iOS, the directory should have been made either with Deco or with react-native init.